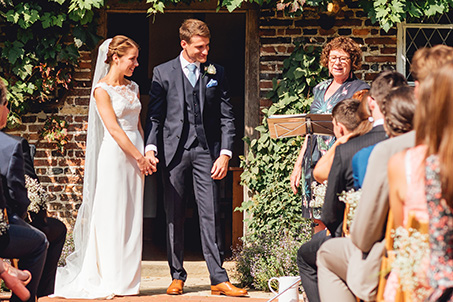 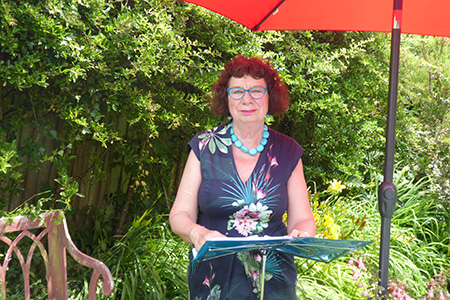 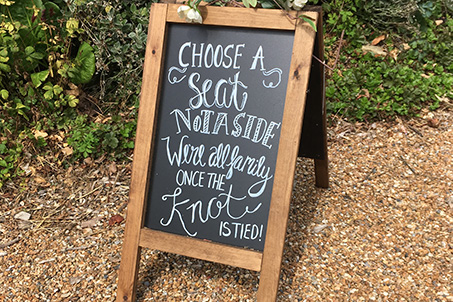 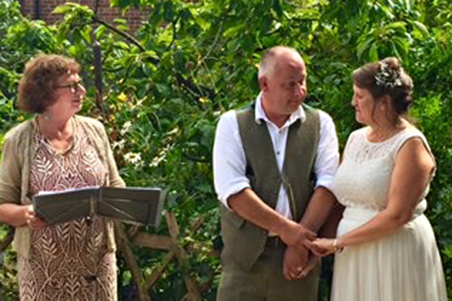 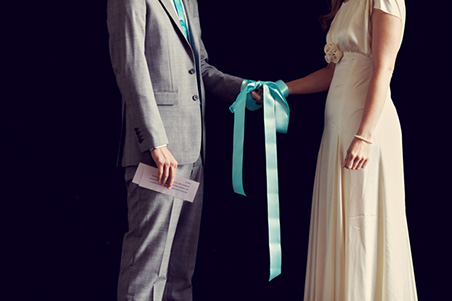 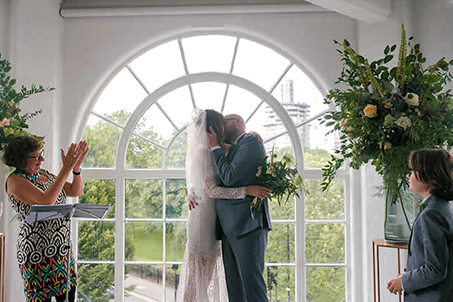 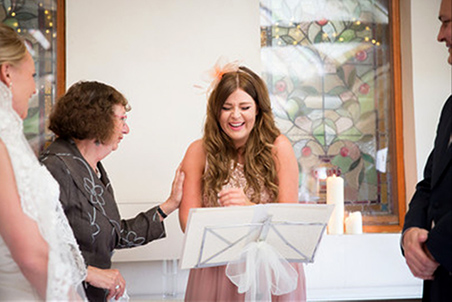 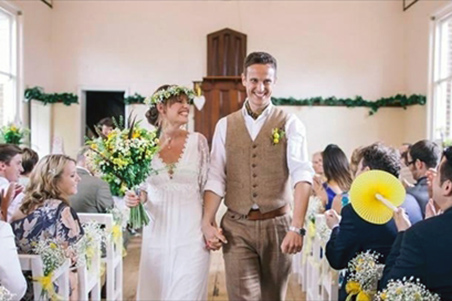 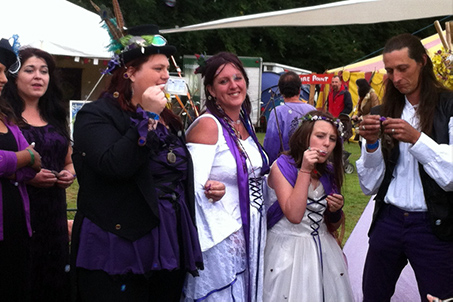 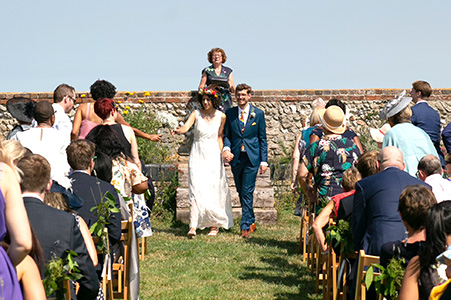 “We’d like to say a great thank you to Felicity for sharing our special day with us as our Humanist Celebrant. The blessing was just magical and our guests said it was the most romantic they’d been to. Additionally it has changed the minds of my many ‘marriage isn’t for me’ friends, by showing them how personal and relaxed a humanist wedding can be” – Sabrina and Matt

If it’s at all possible, I recommend a rehearsal – often in the venue the evening before when the key players have arrived. It means that everyone can practice in the space and we can work out how to get round any logistical issues. This is a rare photo of a rehearsal, because unusually the official photographer came along to get a preview.

“It was a joy to see you in action – what a gift you have!” – Wendy, the groom’s grandmother

We would just like to thank you again for such a wonderful ceremony, we are absolutely over the moon with how it went. I cannot tell you the number of people that commented on how much they enjoyed that part of the day. They loved the intimacy and personal nature of the service and thought you did a great job. We can’t thank you enough for making it even more special than we could have imagined, I am so happy we found you! Olivia and Josef

Sometimes those contributing to a wedding are overcome with emotion – either bursting into tears or, as in this case, being overwhelmed with giggles. At a humanist ceremony, though, the atmosphere is relaxed and people feel able to let go without embarrassment.

Brittany was from the States, Will was from Kent. Their mothers brought little phials of sand from each location to the wedding, and these were mixed together at the ceremony, symbolising the merging of the two families and cultures.

We want to say a heartfelt and resounding thank you, for your work in planning, organising and conducting our beautiful ceremony of marriage under the poplars. You were supportive and creative during the initial phase, and embedded our ideas smoothly. The final ceremony felt just right – it was deeply personal to our journey together, and full of warmth just as we’d asked. All of our family and friends felt part of that circle, both literally and emotionally, and you helped to build a spirit of community and togetherness in the field that has stayed with us, and all who were there, as treasured memories. Countless people have told us it was one of the most moving weddings they have ever attended, and we would like you know how very grateful we are to you for helping it to be so very special. Lou and Mikey

Kathy and Peter are both keen bikers – they met when they were neighbours, and started to borrow each other’s tools over the fence. So they left the ceremony in style. In other weddings, I’ve also had the groom arrive on a horse, the couple leave in a boat, and on one occasion we all stripped down to our swimmies at the end of the ceremony and jumped in the sea. More conventional arrivals and departures are also quite acceptable, though – the point is that the wedding is designed with you and for you.

Here are Chris and Vicky. Two years later to the day, I conducted a naming ceremony for their son, Thomas. It’s always a real pleasure to work with a family more than once and to see their stories develop.

Kerry and Michael married on a beach on a Greek island – here they are exchanging rings, with Kerry’s son looking on. They married at dawn, and included a number of both Greek and German inspired elements in their wedding. This was the wedding which was immediately followed by a swim.

We had so many lovely comments about how fantastic you were and the service itself. Both Rom and I are very pleased we went with you for our big day as you made it so very, very special. It’s a day we will never forget and you are a big part of that. Thank you again, Mr & Mrs H (Emma and Rom)

Chrissy and Andy make their living running a shop at music festivals, so many of their closest friends are people who work at festivals. They got married at the Over the Moon Festival near Hailsham – I had to be signed in as crew to do the rehearsal and then the ceremony.

Felicity was such a lovely person to celebrate with – she cared about our story and made it a real part of the ceremony. She listened to what we wanted and was very understanding even when we were very tardy with our responses! I loved having her conduct our ceremony – I feel we were very lucky to have her, and so many people told us what a lovely and personal service it was. I would recommend her to anyone.  Becca and Joel

If what you’ve seen here interests you, do ring me on 01892 783226, email me at:
felicity@felicityharvestcelebrant.co.uk
or look at my Facebook page Humanist Harvest for more recent images and feedback.