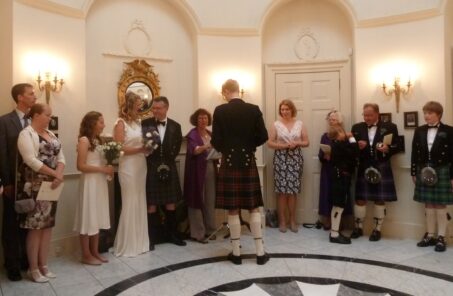 The new statistics were released by the National Records of Scotland earlier this week. They were analysed by Humanists UK to calculate the total number of humanist and Christian marriages. In total there were 5,879 humanist marriages, compared with 5,812 Christian marriages. Humanists UK’s sister organisation Humanist Society Scotland was the largest single provider of marriages, with its celebrants conducting 3,276. The Church of Scotland conducted 2,225 marriages, while the Catholic Church conducted 911.

I had the pleasure, in 2013, of legally marrying Judith and Chris in Scotland, just outside North Berwick.  As an accredited Humanists UK celebrant in England I was allowed to do that.  It was a wonderful feeling to officially sign that form!

Thinking about having a humanist wedding?  Have a look at https://www.felicityharvestcelebrant.co.uk/weddings/ or give me a call on 07708 933607